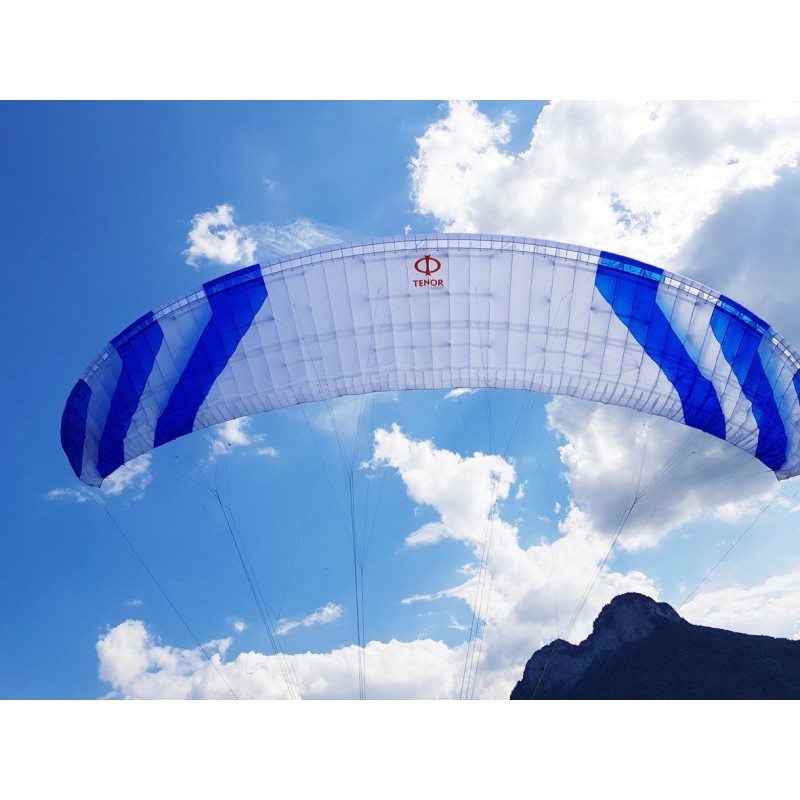 Lead time around 1 to 2 weeks

The TENOR light uses modern light construction insights to combine high aerodynamic efficiency with exceptional form stability and incredibly low weight. The performance and speed enables ambitious Hike & Fly adventures that can be relaxing at the same time. The risers are made from stable and robust TECHNORA. Choose softlinks or light metal maillons.
Such lightweight performance and safety has never been seen before! Try it for yourself.

The weight reduction of the TENOR light over the normal TENOR is offering even better recovering after deflations and even less dynamic reactions in extreme manoeuvres. So it was possible to rise the max take off weight by 10kg. This has to be seen as an extended weight range, for pilots who want to fly a high loaded, small, light and very agile wing, offering extreme fun and performance at speed.

Phi is a new brand making its own way onto the market, but it doesn’t mean that they come from nowhere, its creator Papesh is probably one of the best designers in the world. He created the software currently used by Advance and Nova (he has been the designer for several years).

For information, the Tenor light is a lighter version of the Tenor (4.7kg).

The Symphonia, the En A wing from the same brand is also a Tenor but lighter in-flight weight, so even accelerated the Symphonia stays En A.

Let’s begin with the minus point … the carrying bag:

Can we call it like this? Half fast bag, half carrying bag, this bag is used to stuff it with the glider, but gives you no comfort (no ventral strap and no maintain in the back…) Anyway, you won’t travel a lot with that.

It’s something never seen before for a B access.

The leading edge is a shark nose type, tight openings, very rigid reinforced simple ribs on the sides and middle of the cells. You know you got a nice mouth :D

The trailing edge, thin polyester braid and the usual Velcro opening to empty the twigs. Little reinforcement bands on all the span of the wing between the lined cells. Different look than the other brands, you can recognize it with the diagonal stripes. The Tenor light is only available in white, with blue or red stripes.

The fabric used is the best one you can find = Porcher 32g for the leading ledge and 27g for the rest. It’s the same fabric that uses Advance for the Pi2 and the Xi.

The Tenor light is also available with standard risers: little links for the risers with a plastic casted piece used to fix the lines. O ring system for the accelerator on the B/C. Supple handle with ceramic rings, magnets and swivels.

Or light risers = same thickness, with straps but without A’ for the ear kit with Dyneema connections replacing the links – light grip with no magnet.

Super easy, no grip, you can untangle with a single shake. You know, with 7 low lines, it’s so easy that you can’t miss.

The lines are very long ... you are 7m away from the wing! Although, with a bit of wind, the wing lifts without even using the risers!

With no wind, it lifts nice and steadily, no problem. With a strong wind, the wing flaps a little bit but it doesn’t rip off or surpass you. Despite her lightness, you feel the glider, the take off is instant and reassuring .

20cm before action point… it’s way too much! Adding that to a very long break range... even with a break wrap, I can’t act properly in traction. So, this is an access B that doesn’t punish too much for your mistakes, but if you want some reactivity, you’ll need to shorten the breaks.

Surely, I just tried the big sister, the Maestro, I feel it weird to use a beginner’s paraglider, of course the Tenor is made for beginner,

I haven't tried the Symphonia, just simply because it’s the same glider with a lower total weight, but honestly, I would advise a beginner to choose the total weight of the Tenor instead of the Symphonia.

Its behavior in flying reminds me of the Hook 5 (which is also in A non accelerated) but the Tenor has a slower reaction, even better for the beginners.

The damping of the pitch is insanely good.

After several minutes of thermal, I started understanding how to keep it in the turn (the wing is really stable spiral)

The wing is damped but as it’s a light you can feel the information in the thermal.

Ears: there’s only 2 A lines, 1A + 1A' the ears are pretty big, pretty physical and re-open even no need to pump, and but scrapping the other lines – because of the profile.

Roll: the glider is slow to enter in the turn, it accelerates slowly after one turn, then faster, when you release, it naturally goes out without countering almost even going the other way, because of its pitch damp that prevents the wing from shooting.

To exit a 360, you’ll need to break the side of the turn to counter the reverse-roll.

You’ll need to time correctly your thermal turns with your harness in order to compensate the stability of the wing, anyway, the turn stay flat. You need to fly without holding outside the turns.

Let me explain, the first one, its wing is really good, like the second one, there’s a risk that it will be too much amortized. As a mountain calm wing, you’ll love it!

The Tenor (light) is made for talented beginners and young pilots who want a light and safe wing.

The design is really nice and top quality. 3.2kg with coated lines with Skytex 32 on the trailing edge, perfect.

Personal opinion: that Tenor light is an excellent glider for everybody because it’s compact, it has strong lines that withstand pebbles giving us a really good passive security. This is for all of you who wanted a Pi2 with coated lines.

I recommend using it with an Advance Easiness 3, your bag will weight 7-8kg (reserve included).

Be on top of the Total weight range or even above the top !

Get the best discount

In our shop in Doussard and on our online store, you see immediately our discount in the cart : Easy, clear and fast ! You get the best discount we can give you according to the brand and the total amount of your purchase.

The discount are automatically calculated in the cart - see last lines , under products. If you live outside European Union, connect to your account and see all prices without taxes. see duty free procedure

As you see, most of the products are already discounted in the shop

When you put 2 products in the cart, you get an extra-discount on top.

When you put 3 products in the cart, you get an extra-discount on top.

If you put 2 or more paragliders or harness, you get an extra-discount for group purchase (1 payment, 1 delivery).

This discount comes on top of the pack discount

You can buy Paratroc VIP CARD and receive all year long an extra discount and other advantages.

VIP CARD Discount comes on top of all other discounts (not always same discount, it depends on product)

For example, if you are from Switzerland, you will have to pay Swiss Taxes (8%) = you win 12% on total price.

When you connect to your account, prices are automatically without taxes.